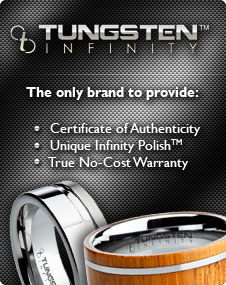 You’ve already heard about the quickly growing popularity of tungsten rings.  At the same time, you wouldn’t be human if you looked at the emerging tungsten rings market and did not think about what would happen if everyone owned one.

While those concerns surrounding tungsten rings are understandable, the great thing about the market is that there are dozens of options available.  One such option that will allow you to wear a unique tungsten band is a two-tone ring.

While a two-tone ring sounds like an exciting and innovative idea, the heritage of two-tone rings actually stretches back hundreds of years.  However, those rings would use metals such as gold and silver, which scratch easily and in many ways would not stand the rigors of life in the 21stcentury.

Today, a two-tone tungsten ring is about the functionality as much as anything else.  Of course, the fact that they look brilliant is a welcome added bonus.

What are two-tone rings all about?

There is more than one way to create a two-tone tungsten ring.

Although the women’s market for two-tone tungsten rings is growing, they are still the preferred choice of men, predominantly.  This allows fashion conscious guys to wear a ring that is both contemporary and stylish, while losing nothing in terms of function and convenience.